Tips for a trip 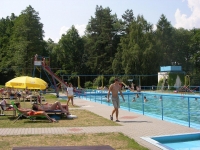 The swimming pool is located on the outskirts of the village, in the areal there is a possibility of refreshments and accommodation.

The flooded quarry in Štachlovice is now used for recreational swimming and also for fishing. The town of Vidnava has established a fishing ground here, the owners of valid fishing licenses can buy permits directly at the town hall of Vidnava. 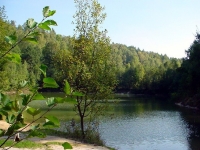 One of the most beautiful quarries in the region, reminiscent on a reduced scale of the romantic landscape of the Wild West or Canadian lakes. And if you are lucky enough to be alone at this quarry, you will brathe wonderful peace and quite. Kaolin was mined in the quarry before, and therefore even today the banks and surroundings are white and even the water on some days.

Kaolin was used for the production of porcelain, fireclay, floated kaolin is then used as a filler in the production of paper as an additive to paints and refractory bricks. The characteristic properties of there bricks are heat resistance, plasticity and bonding. 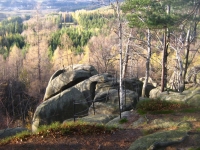 Smolny Hill is a hill with small rock town on the top and the national natural monument Venus´s Bowls. Venus´s Bowls are just below the top of Smolny Hill, which rises north of the village Černá Voda in the Rychleby Mountains. The natural monument consists of interesting rock formations. The bowls have a diameter of about 1 meter and a volume of up to 500 litres. They are interesting natural creations.

The top is accessible from the road from Velká Kraš towards swimming pool and the former pioneer camp, where you can park your car. From there follow green tourist sign towards Černá Voda. Of cource, you can go the other way around. Attention, the turn to Smolny Hill can be easily overlooked.

Gold mills are medieval mining museum, built in the wild on the river Olešnice near the town of Zlaté Hory in Valley of Lost Adits (Údolí ztracených štol). Visitors have the opportunity to see gold mining log cabins, fully functional replicas of gold ore watermills from the 14th century, incuding rises for crushing gold ore and other tools used in gold mining. Visitor can also rent pans in the open-air museum and try panning for gold on site. An educational trail passes through the area - Valley of Lost Adits (Údolí ztracených štol).

The town of Otmuchów - PL

Otmuchów is undoubtedly one of the most interesting and beutiful cities in Opole Silesia. Town is in the southwestern part of the region, near the border with the Czech Republic. It was founded on the left bank of the river Nysa Klodzka, by the historic ancient trade route leading from Nysa to Klodzko. The town is the one of the oldest in Silesia and its roots date back to Middle Ages. For many years it belonged to the Wrocław diocese. At the same time from the secularization Otmuchów gained independence in 1810. The specific beauty is of its architecture is associated with belonging to the episcopal priesthood. This is evidenced by the many historical monuments that have been preserved to this day. One of them is the castle of bishops rising above the town, which was a defensive seat and at the same time served as a treasury. The Baroque church dedicated to St. Nicholas and Francis Xavier also deserved attention. A special feture of the town is the town hall with its unique sundial.

Lakes in Nysa and Otmuchów

The Nysa Riviera - as Lake Nysa is often called - is a perfect place for lovers of water and other sports. The lakes are still not very affected by tourism, they have plenty of idyllic nooks, sandy beaches and allow their visitors not only swimming in clear water, but also enough space for undisturbed relaxation.

The town of Nysa - PL

Nysa (Czech Nisa) is one of the oldest Silesian cities. It was probably founded in the 10th century and became the head of the Duchy of Nisa of the same name. Under this name, it was part of Wrocław diocese in 1200 and together with it also belonged to Lower Silesia. In 1424 it had to defend against the Hussites.

During the Thirty Years´ War it was besieged three times. then costly rebuild into a fortress (Nisa Fortress) and during the Napoleonic Wars it was conquered by the French in 1807. Within Prussia, it retained its Roman Catholic character. It was nicknamed „Silesian Rome“ for its many Baroque and Gothic churches.

Castle Jánský Vrch is the only accessible historic monument of the Jeseník district, together with the landscape park it forms a significant dominant feature of the town´s monument zone. It rises on a rocky hill above the town of Javorník, which can be found in the northernmost tip of the Olomouc region, in former territory of Silesia.

14,4 km from Vidnava to Javorník

Access to the lookout tower is via tourist routes from Javorník, Travná, Bílá voda and Poland

The closest car can be parked in Travná at the border crossing, the road was repaired through Travná until the crosing and the crosing is open to cars after the entry of the Czech Republic and Poland into the EU Shengen area. From the border. take the forest road to the right and walk to the tourist signpoitn "Nad Travnou". From there, follow the blue tourist sign to the "Borůvková hora" signpost and from there follow the red tourist sign to the top of the mountain to the lookout tower. http://www.boruvkovahora.websnadno.cz/ 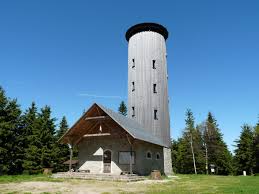